THE STORY OF A LEGEND.
The strength of an idea.

It all began with a bench on Corso Re Umberto, one of the most famous streets in city centre Turin.

A group of friends congregated on this bench. They all possessed a shared passion for football, a special game that had recently been ‘imported’ from England. They had an intriguing idea, to create a sports club. The boys attended the ‘Massimo D’Azeglio’ high school which specialised in classical studies. They were well educated but the eldest was just 17 years of age. This paved the way for the club’s name. In Latin, the name ‘Juventus’ means youth. They weren’t aware of it yet, but on 1 November 1897, they had given birth to a legend.

And so Italy’s greatest football team was born, almost by chance. The club’s first President was Enrico Canfari, the first ground was Piazza d’Armi (Parade Ground) and the side started out wearing pink. Sporting that same jersey, the club made its debut in the national championship in 1900. Three years later, the Bianconeri colours, which had come from Nottingham, were in use. Five years later, the first Italian title arrived when Juve successfully beat off stiff competition from Genoa and Milanese. President AlfredoDick from Switzerland, left the club shortly afterwards following various complaints and rifts in the dressing room.

​He then went on to found Torino FC, bringing the best foreign players from Juventus with him. Juventus then endured some difficult years as they failed to keep pace with the new footballing superpowers of the time, Pro Vercelli and Casale.

The Bianconeri made a triumphant return following the First World War: goalkeeper Giacone and defenders Novo and Bruna were the first Juventus players to wear the National Team’s jersey. The President was poet and scholar Corradino Corradini, who also wrote the club anthem which was used until the 1960s. 1923 was a special year as one of the greatest goalkeepers of all time, Giampiero Combi, made his first team debut. He would go on to contribute heavily to a change in the club’s standing. On 24 July, a shareholders’ meeting saw Mr Edoardo Agnelli, son of the founder of FIAT, elected as the new president.

The club also now had its very own playing surface in Corso Marsiglia. The terraces were just bricks but the number of supporters increased day by day. Juventus had all the foundations to rise through the ranks of Italian football and to strengthen a side already boasting the likes of Combi, Rosetta, Munerati, Bigatto and Grabbi. Then came the the first official manager, Hungarian Jeno Karoly, and the first foreign world-beater, Hungarian left-winger Hirzer.

In 1925/26 Juventus won their second Scudetto title following a gripping regional final against Bologna and then a resounding 12-1 aggregate win in the national final against Alba Roma. But this was just the beginning. From 1930 to 1935, Juve were streets ahead of the rest as five consecutive Scudetto trophies made their way to Turin. The main ingredients of the ‘Golden five-year period’ were the manager Carlo Carcano and champions such as Orsi, Caligaris, Monti, Cesarini, Varglien I and II, Bertolini, Ferrari and Borel II. Juve also made a significant contribution to the national side, who won the World Cup in Rome in 1934.

The 1930s saw the Bianconeri have their first experience in a continental competition when they took part in the European Cup, currently known as the Champions League. Although luck was not on Juve’s side, they did manage to make four semi-final appearances.

Juventus resumed their success after the Second World War. Following the tragic death of Edoardo Agnelli in a plane crash in 1935, his son, Giovanni, took on the role of president in 1947. The club’s most revered champions at the time were Carlo Parola, Danish duo John Hansen and Praest and, most notable of all, Giampiero Boniperti. Cheered on by thousands of fans, they recorded Scudetto triumphs in 1950 and 1952.

In 1953, Giovanni Agnelli stepped down from the presidency and it was then passed onto his brother Umberto two years later. Juve were on the brink of another triumphant cycle. The arrivals of Omar Sivori and John Charles helped the Bianconeri to the Scudetto title in 1958 which allowed them to wear a star on their shirts to mark ten national championship victories. The club recorded three further successes during the 1960s, with the last coming in 1967 under the presidency of Vittore Catella. However, the start of the new decade yielded even greater additions to the Juventus history books.

Giampiero Boniperti may have hung up his boots, but he continued to lead the team by taking on the role of President on 13 July 1971. After this, there was no stopping the Bianconeri. 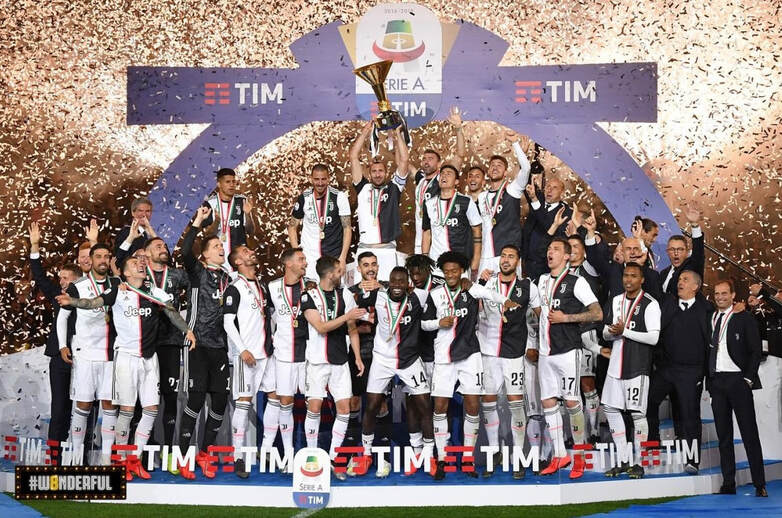